What is Boxer’s Knuckle?

Boxer’s Knuckle is an injury to the structures around the first knuckle of a finger, also known as the metacarpophalangeal joint (MPJ).  The skin, extensor tendon, ligaments, joint cartilage, and the bone of the metacarpal head may all be involved.  Repeated impacts to the extensor tendon over the knuckle causes Hypertrophic Interstitial Tendonosis, or HIT Syndrome.  This is a thickening, weakening, inflammation, and scarring of the extensor tendon. 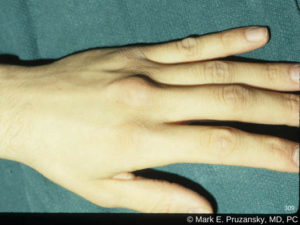 Pain and swelling around the knuckle are common.  If a ligament like the sagittal band is torn the extensor tendon may fall out of place and an inability to fully straighten the finger occurs.  Snapping of the extensor tendon over the bony prominence of the knuckle may be heard as well.  The long finger knuckle is most commonly involved.

Boxer’s Knuckle is an injury that results from one or more mishits absorbed by the knuckle.  Most commonly seen in athletes who engage in Boxing, Kickboxing, and Mixed Martial Arts.

Speaking with you and a careful physical examination are essential to identify the injured structures and provide a correct diagnosis.  X-rays are also useful to evaluate for abnormalities of the joint or bones.  Less frequently, an MRI may aid in the diagnosis and help to guide treatment decisions. 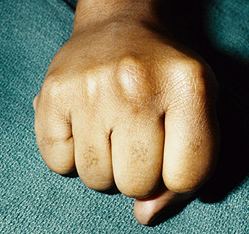 An alternative view of boxer’s knuckle

Injuries that are painful, but have an intact extensor tendon that moves the joint, may be treated with splinting and anti-inflammatory medication while the hand is rested.  More severe cases, such as an inability to straighten the finger, snapping of the extensor tendon, or the presence of joint instability, may need surgical repair to improve function.

Boxer’s Knuckle can be painful and leave you with a hand that is difficult to use. Call NYC Hand Surgeon Dr. Pruzansky at 212-249-8700 to schedule an appointment and quickly identify the diagnosis, so you can begin the healing process.