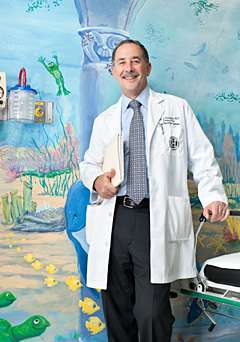 It’s often said that doctors make the worst patients—or at least the most skeptical ones. Pediatric oncologist Joel Brochstein became an exception to the rule after visiting Dr. Pruzansky with a wintertime injury that gave him severe pain in his left wrist. “I took a tumble on the ski slopes and kept on skiing for a week afterwards,” admits Brochstein, who upon returning to his practice in New Jersey sought consultation with a local doctor, who recommended four weeks of immobilization in a cast—with no substantial alleviation of discomfort.

As a result, Brochstein—an avid tennis player—was forced to give up his three-day-a-week playing schedule. More significantly, the busy oncologist was prevented on several occasions from harvesting bone marrow from donors due to his inability to scrub for the procedure.

After calling around to New York hospitals for hand surgeon recommendations, Brochstein was reffered to Dr. Pruzansky, who was able to diagnose a triangular fibrocartilage tear, an injury common to skiers who fall on a hyper-extended wrist, as well as severe ligament tears destabilizing the wrist leading to debilitating pain and weakness. Dr. Pruzansky was able to reconstruct the ligaments and repair the tear through an arthroscopically assisted outpatient procedure that demanded only regional anesthesia. “It was actually not bad,” said Brochstein of the surgery. “I was taken care of very professionally. Dr. Pruzansky’s office works like clockwork.”

After being immobilized in a cast for several weeks, Brochstein had eight weeks of occupational therapy before being cleared for all normal activities. Full recovery for the oncologist has included tennis—“my toss and serve took a while to get back, but now it’s as good as it was before.” As for winter activities, Brochstein admits that since the surgery he has hit the slopes again, only this time “with more caution and trepidation.”