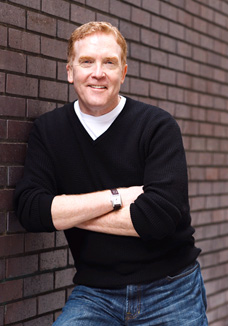 New York–based actor and playwright Sean Grennan’s joint problems began 30 years ago when he dislocated his elbow during wrestling practice at Northwestern University. “I was so tough back then that a few weeks later I wrestled in the league championships,” he recalls with a laugh.

Thirty years later, however, things were a bit different when he launched on a fitness regime that entailed lifting weights. The familiar but unwelcome pain at his elbow joint that resulted soon had Grennan seeking medical help. Frustrated after hearing from one doctor that nothing could be done, he set about to find a highly regarded elbow specialist and was referred to Dr. Pruzansky. “At the same time my wife was on a plane and saw a write-up in an in-flight magazine about Dr. Pruzansky,” he says, “so I took it as a sign.”

Upon initial examination as well as an MRI and CT scan, it became clear that not only did Grennan suffer from the residual effects of his college injury in the form of a chronic tear in his medial collateral ligament, he had also developed osteoarthritis that limited his ability to extend his arm. “By this point it was hard to put on a shirt in the morning,” he recalls. Treatment came in the form of an arthroscopically-assisted procedure during which Dr. Pruzansky was first able to smooth the surface of Grennan’s arthritic elbow, release contractures and remove loose bodies and then repair and reconstruct his medial collateral ligament using a tendon taken from his forearm – the modern version of the “Tommy John” operation.

Six months later, after extensive physical therapy, Grennan is on his way to regaining normal use of his elbow – a great relief for the active New Yorker, who still enjoys working out at the gym and is active in the New York theater world. “I’ve had to see quite a few doctors in recent years,” says Grennan, “and it has sometimes felt like a factory experience. Dr. Pruzansky was different. There was great communication and a personal connection.”